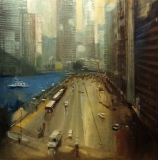 Chicago 4
Piotr Piecko was born in 1967 in Warsaw. He graduated from the sculpture
department of the Academy of Fine Arts in Warsaw in the studio of Professor
Grzegorz Kowalski and did post-graduate studies at the School of Fine Arts in Lausanne (Switzerland) at the computer graphics animation faculty.
For many years he worked as an art director, graphic designer and photographer with many publicity houses like: Axel Springer Polska, Murator, IDG, Valkea, New Media Concept, etc ...
Currently, he deals with painting, sculpture, photography, film and broadly understood graphic design.