Trees on the Krutynia River

Girl in the subway

City yard. Through the hole in the broken glass

The Sun on WIlcza Street

Out of the way

Fans of the Blues

Image in the mirror

The smell of dill 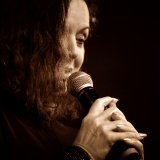 Guitarist of a unique duo

Lora in the mist
Born in Warsaw (1964).  I have been taking pictures since I was 15 years old. Photography is my passion. I am the author of portraits, jazz photography, architecture, abstraction and landscape photography. Academically - connected with the University of Warsaw (Faculty of Geography and Regional Studies). I cooperated with the editorial board of the university's cultural magazine 'Uniwersytet Kulturalny'. Referring to music and art, I wrote texts ('Zadurzeni w Jazzie', 'Wielkie kino bez kina', 'Słodkie życie Felliniady', 2002) published by the Polish Cultural Institute in Warsaw. Individual photos of me have appeared in photography and music magazines. I have also collaborated with organisers of concerts and music events such as Jazz Jamboree, Era of Jazz, New Music Art, Fabryka Trzciny; I photographed at the Helicon Jazz Café club in Warsaw. In 2015 I joined the Warsaw-based Foto Jazz Group (group exhibitions).
I started taking photos at the age of 15, observing the landscape and my friends on school trips (analogue photography, black and white). Over time, the subject matter expanded and turned into a passion.
The themes of my photography are: street photography, jazz photography - unposed portraits of musicians and singers, portraits, abstractions and sometimes - landscape.

The photographs are taken in analogue, digital and mixed techniques: black and white, colour, sepia; without flash in existing light conditions.

I am the author of many solo exhibitions and three series.

'Point of View' is the last exhibition of photography I presented, depicting people, situations and places. Some of them delight, others amaze and make you think. Portraits of women, landscapes and photographs of streets. This is a new, hitherto unknown, photographic view of the author. The exhibition was exhibited at the University Gallery in Warsaw, in January 2020. Earlier (in 2019), I presented a series of jazz photographs entitled. 'Only in the darkness', stage portraits of musicians and abstractions. Two such series were exhibited nationally: 'Musical Impressions' and 'Only in the Darkness'. - jazz portraits of musicians taken during concerts in the dim light of the stage.

2017 Warsaw, Residence of the Ambassador of the United States of America

2019 Warsaw, University of Warsaw Library, 'Only in the Darkness'