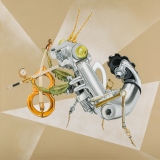 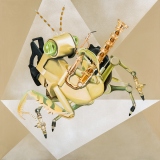 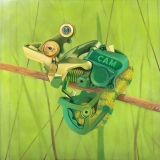 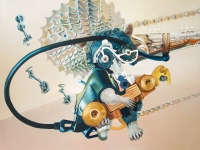 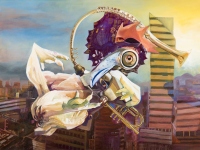 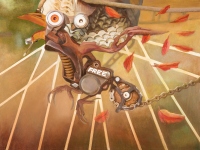 Breaker
​A graduate of the Julian Falat School of Visual Art in Bielsko Biala. She holds the master’s degree of Film and Media Arts from Jagiellonian University. She also studied at the Artistic Department of the University of Silesia in Cieszyn, but she interrupted it by leaving for Warsaw, where she lives and creates until today. The Pareidolie cycle has been painted since 2018.

According to wikipedia: Pareidolia is a phenomenon of interpreting random objects and shapes as something known to the observer, i.e. seeing faces in inanimate objects or shapes in clouds.
This is the way the autor depicts reality. When she spots the "soul" of the object, she portrays it to further convey the discovered narration.

On her canvases, machines, household appliances, mechanical parts and accessories are transformed into surrealistic creatures with personalities and desires. Seemingly free, but frequently limited to the world of automatic repetitions. Creatures trapped in between the biology and technology, as much loose as cripply imperfect.

Bicycles are her biggest inspiration. When she finds an interesting bike, a derallieur, a handlebar, most often she notices as well a new being with its story to tell.